Each year, we gather a selected panel of in-house counsels and IP experts to discuss hot topics from the field of pharma IP. Our next Pharma and Life Science Day will take place on 12 November 2021 at Schloss Suresnes.

Stolmár & Partner is pleased to announce that the firm has been named as one of Europe’s leading patent law firms in a report published today by the Financial Times. This is the second time for Munich based Stolmár & Partner to be featured among the top IP firms in Europe.

The Financial Times Europe’s Leading Patent Law Firms 2021 report is compiled by the Financial Times in cooperation with Statista. Now in its third year, the report’s results are based on the testimony and recommendations of over 10,000 patent lawyers, R&D experts and clients that have consulted with or commissioned patent law firms.
Dr. Matthias Stolmár, founding parter at Stolmár & Partner, comments: “We are delighted that our team has received this well-deserved recognition. Our patent attorneys are all experts in their chosen fields, enabling Stolmár & Partner to offer bespoke service to its clients through innovative thinking. In addition, our attorneys are prepared to go the extra mile to come up with individualized technical solutions such as Kanban Case Management that are unique in the field.”

The complete ranking can be found here. hier.

We would like to take the opportunity to thank our clients and colleagues for their continuous support and good references.

Leading IP experts from all over Europe have teamed up to draft a White Paper warning governments of the dangers of waiving IP rights for Covid vaccines. Dr Matthias Stolmár is among them: "The proposition by the US government is a poor response to the current issues that will not only be unable to solve the underlying problem, but instead harm pharma research for years to come".

Stolmár & Partner is once more listed as one of the leading German Patent Law Firm in the JUVE Handbook of Commercial Law Firms. The ranking reflects our expertise in patent prosecution and patent litigation as well as technical know-how in the fields of chemistry and medtech.

Dr Matthias Stolmár has been recommended by JUVE for many years. This year makes no exception. "I'm honoured that my work is praised by colleagues and clients alike. We will continue to provide outstanding service!" 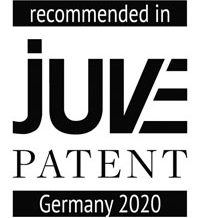 New face in our tech team

Stolmár & Partner  is happy to welcome a new face to our tech team.

Bastian Scharre is German and European patent attorney. After his training in international IP firms ihe joined a US American automotive supplier, where he organized inter alia global IP trainings and represented the company in out of court proceedings. Before joining Stolmár & Partner, he advised clients in his own IP law firm in prosecution and opposition matters. His technical focus is on automotive, exhaust gas treatment and mobile communication terminals.

There were two more additions to the tech team this year: Miroslava Nicole George is an experienced patent engineer and has worked for a number of renown IP firms in Munich. Erik Schmidt is currently training to become a German and European Patent Attorney.

We wish our new colleagues a good start here at Stolmár & Partner.

Matthias Stolmár shares his insights into how to best file a patent application in Germany over at IPWatchdog, one of the most leading news sites for IP. He explains not only how an application can be validly filed, but also describes the pros and cons of utility models and outlines a strategy for making use of the pecularities of the German system. In cooperation with Morningside Translation, the interview is also available as a video:

Stolmár & Partner is one of Europe’s Leading Patent Law Firms

Parties with a legitimate interest may ask the boards of appeal to deal with their appeals rapidly (see Notice from the Vice-President Directorate-General 3 dated 17 March 2008 concerning accelerated processing before the boards of appeal (OJ 2008, 220) and Article 10 (3) Rules of Procedure of the Boards of Appeal (RPBA 2020).

However, as many of us know, most of these requests for acceleration of appeal proceedings are not be accepted.

Acceleration is generally a matter for the exercise of the board’s discretion at the board’s discretion. While trivial reasons do not warrant acceleration, there is no fixed standard of proof (T 895/13). To quote other positive examples, acceleration has been acknowledged as appropriate, for example, when infringement proceedings were threatened or if the public had an interest in the early resolution of disputes (T 239/16, T 734/12).

One more successful example can now be added to the list: Dr Matthias Stolmár, even though only acting as straw man, recently succeeded in requesting acceleration of the appeal proceedings in T1732/18.

The reasons relied upon in the request can be summarized as below:

15(1) of the Rules of procedure before the Boards of Appeal 2020
The case is more than ready for issuance of the Summons to attend Oral Proceedings. Additionally, given the number of 13 Opponents, only Oral Proceedings could conclude the case in a timely manner without further unnecessary delay.

Replies to the Grounds of Appeal Opponents/Appellees as well as Patentee’s reply to the responses of the Opponents were already filed in February 2020.

Thus, according to Article 15(1) in combination with Article 1(2) of the RPBA 2020 the Board of Appeal could have issued the Summons to attend Oral Proceedings at the beginning of 2020.

No existing comparable case law
Further, the current case could be a fundamental and landmark decision since it is not comparable to current dosage regiment case law.

The opposed patent was revoked on the basis of not involving an inventive step according to Art. 56 EPC.

Length of proceedings
The Appeal proceedings should conclude as soon as possible, since the have been going on for a very long time.

The patent was granted after almost 8 years and the Opposition proceedings lasted 21 months longer than the published early certainty objective.

Term of the opposed patent
Patentees as well as the Opponents have a legitimate interest to obtain a decision in the Appeal proceedings well before the patent expires.

The patent has already entered the 16th year and will expire within five years.

Common interest of legal and market certainty
There is no certainty about validity of the patent.

Currently, competitors are banned to enter any market in Europe where the patent is in force despite it having been revoked in the first instance.

Consequently, it is apparent that a decision is needed as soon as possible.

Stolmár & Partner is pleased to announce that the Board of Appeal followed our arguments and decided to grant the request for acceleration.

Save the Date – Munich Pharma and Life Science Day 2020

“I enjoyed it very much, not only the excellent lectures but meeting with known and not-yet-personally-known colleagues. I noted the next year date – I am striving to attend.”

“Many thanks again for the most enjoyable and informative IP event.”

“A day full of interesting presentations from Unfair Competition, Biosimilars and the Nagoya Protocal to Parallel Trade & the FMD.”

Stolmár & Partner, ARNOLD RUESS and Meyerlustenberger Lachenal are pleased to invite you to attend our annual Pharma and Life Science Day to be held on 12 July 2019 in Schloss Suresnes in Munich.

You will hear more about recent developments in the CRISPR/Cas IP landscape, implications of the Falsified Medicine Directive (FMD), SPC waivers and the Nagoya Protocol. In addition, we will update you on the most recent decisions in Pharma case law, explain the pitfalls of EU competition law and shed light on the question of purity as novelty-confering feature before the EPO.

Our Pharma and Life Sciene Day is a fantastic opportunity to discuss the most recent trends in pharma and life sciences in a relaxed environment with your peers from industry.

We are happy to welcome you to our reception at the Seehaus Englischer Garten afterwards.